June 1997 saw the removal of a prominent land mark in the Blarney/Tower area to make way for a proposed new garage. Located across the road from the avenue leading to where the world-famous St. Ann’s Hydropathic Establishment was situated. The old Post Office and Shop at St. Ann’s Hill, once run by the late Mr. & Mrs. J.J. O’Leary and which was in later years run by their daughter, Mrs. B. McElligott, was demolished. It was a very popular meeting place for local residents in the days when the village of Tower was considerably smaller than it is today. The O’Leary family also worked a farm in the area. An earlier shop had been located in a single storey section attached to the family home which people had to pass by when leaving the station at St. Ann’s. The Post Office building was not very old, being constructed about 1934 and in spite of what people think, it had no connection with the Muskerry Railway, although the terminus was very close to the building. The dimensions of this newer, two storey building were approximately 20m x 10m and 8m high with each storey 4m high. The upper storey was at road level and the lower storey had access from the Muskerry Railway terminus. As one faced the building from the roadway, the left-hand side contained the new grocery and sweet shop, which transferred from the family home when the Railway closed, and itself then closed about 1964. The right-hand side was originally a drapery shop, selling boots and clothes mainly to the farming community, but this part of the building, unlike the grocery, was not open all the time. It would generally be opened on request.  This section was to become the Post Office in 1946 after the Post Office in the Hydro was closed, and lasted until the early 1990’s when the shop and post office doors were closed for the last time. Originally hand operated but later electrically operated petrol pumps were situated in the forecourt. Under new management, the post office was relocated to a shopping mall near to Cloghroe Church. 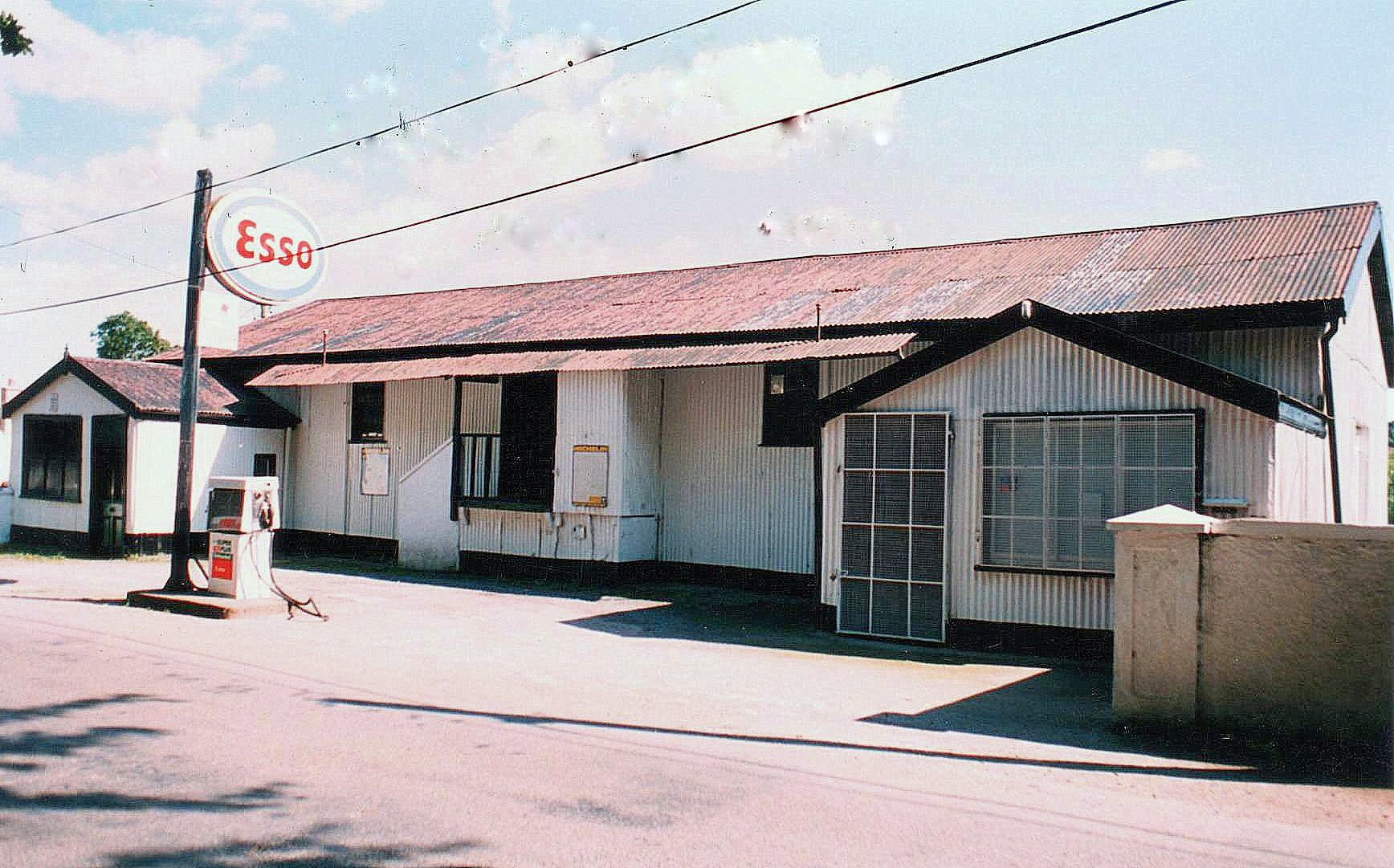 The entire building, both before and during the Second World War, was known as O’Leary’s Mills and was licensed by the Government to roll or crush oats and barley and grind wheat to flour. A grinding mill and a rolling mill, both of which were driven by Blackstone Oil Engines, were used in the process. Farmers pulled up in front of the double doors to unload their grain which was then fed down to the lower floor by means of hoppers or chutes. When the milling process was completed, a conveyor belt with scoops was used to bring the finished product back to the upper floor where it was then bagged. This upper floor was also used as a store. Apart from the milling section, where flour and meal were also stored, the ground floor was divided into several other sections. There was a bull pen, a section for cattle, four horse boxes and a dairy room which contained a butter churn and separator for family use.

Immediately behind this building was another which was known as “The Tobacco Shed”. This large building was constructed almost entirely with timber and had an earthen floor. It was built in the late 1930’s after the railway closed and some of the rail tracks were used as support pillars.   A tobacco crop had also been grown in the large field between Paud’s Cross and Willison’s Bridge. Tobacco growing and farming is an extremely labour intensive process and a number of local people as well as travelling seasonal workers were employed on the farm. Tobacco seed, being extremely fine, had to be mixed with fine ashes to help with the setting. Apparently just 1 Ounce or 28.35 Grams would sow about one acre. The seeds were first sown in hot beds, then when large enough to be handled, transferred into cold beds before finally being planted out in drills in the Spring. The crop had to be labouriously watered by hand during dry weather until harvest time. The leaves were then carefully stripped from the plants and hung up to dry in a very strictly controlled temperature within the Tobacco Shed. Braziers, in this case tar barrels, using coke which generated no smoke were lit outside the building and the heat was then piped inside. Once cured, the leaves were baled and packed in canvas inside cube shaped boxes. Initially there was a tobacco factory known as Munster Co-operative Tobacco Company, Kilnap, County Cork, to which the boxes of tobacco were sent for processing but when this closed, the crop was sent to Powers Tobacco Factory in Waterford. Government taxation and Customs and Excise regulations killed off the local industry as the grower did not get paid for about twelve months for his crop. The tobacco shed was dismantled during the Second World War years and its timber used for building. The enterprise lasted less than ten years.

About 1985, one of the engines, a 1912 Blackstone, 9 horsepower hot-bulb (paraffin-oil) which was not in running order, was obtained by a vintage activist from Mitchelstown, and so left the area. It was rediscovered by a local vintage enthusiast who repurchased it circa. 2001 and it is again back in the district. After some minor repairs it was put on show at Killarney Vintage Show and Innishannon Steam and Vintage Rally and since about 2015 is currently in the possession of a local engine collector. Over time this man gradually refurbished and lovingly restored it to its former glory and it is in full working order having fired once again in June 2021 after many years idle.

The proposed garage was never built and the site of St. Ann’s Post Office and Shop is now sadly overgrown and looking rather derelict.