The Weir and Mill-race of Blarney Woollen Mills

The village of Blarney stands on the River Martin and it was to this place that the Mahony Brothers were attracted in 1823 when they were considering relocating their business from Blackpool in Cork city to Blarney in 1824. They had a weir/dam constructed across the River Martin approximately 2 kilometres from the location of the mill buildings. This area became known locally as the ‘Big Pond’. A mill-race was then constructed which diverted water from the pond for general use in the mill and also to provide force to drive water wheels which in turn transferred power to various geared shafts for the mill operation.

The Freeman’s Journal of September 27th 1881 tells us: ‘They brought their operations to Blarney in 1824 during recession and took on one of the then idle mill buildings on the banks of the Martin. It housed one worn water wheel which generated 14 horsepower. But in a little over fifty years their total operation had risen to a potential of 345 horsepower with 127 power looms and 11,000 spindles at work.’ The River Martin flowed through a cutting in the Dam/weir wall and its flow was controlled by a cog-wheel and ratchet operated hatch which when lowered caused a back-up of the River Martin water up-stream behind it to a level which depended on the height of the structure, creating a storage reservoir known as a Mill Pond or a head of water and this water would be sufficient to run a mill wheel via a Mill-race for many hours duration.

The building of such a dam required a minimum of two outlets to allow surplus water to flow past or through the dam once the pond behind it became full and the other is where the water is released to flow into the mill-race to reach the mill-wheel. The main hatch in the dam face would be lowered to block the River Martin thereby replacing the water being released through the feeder pipes into the mill-race. When the water was backed up sufficiently, the surplus flowed over the parapet of the dam or the hatch raised to release pressure from flood waters. The Irish Tourist Association, Topographical and General Survey, 1940s “noted that the water behind the dam (the Big Pond) was fifteen feet deep in places and used, at that time, as a male swimming pool.” Unfortunately, from the time of its construction in the early 1800’s to the latter part of the 1900’s, it has also been the scene of several drowning tragedies. 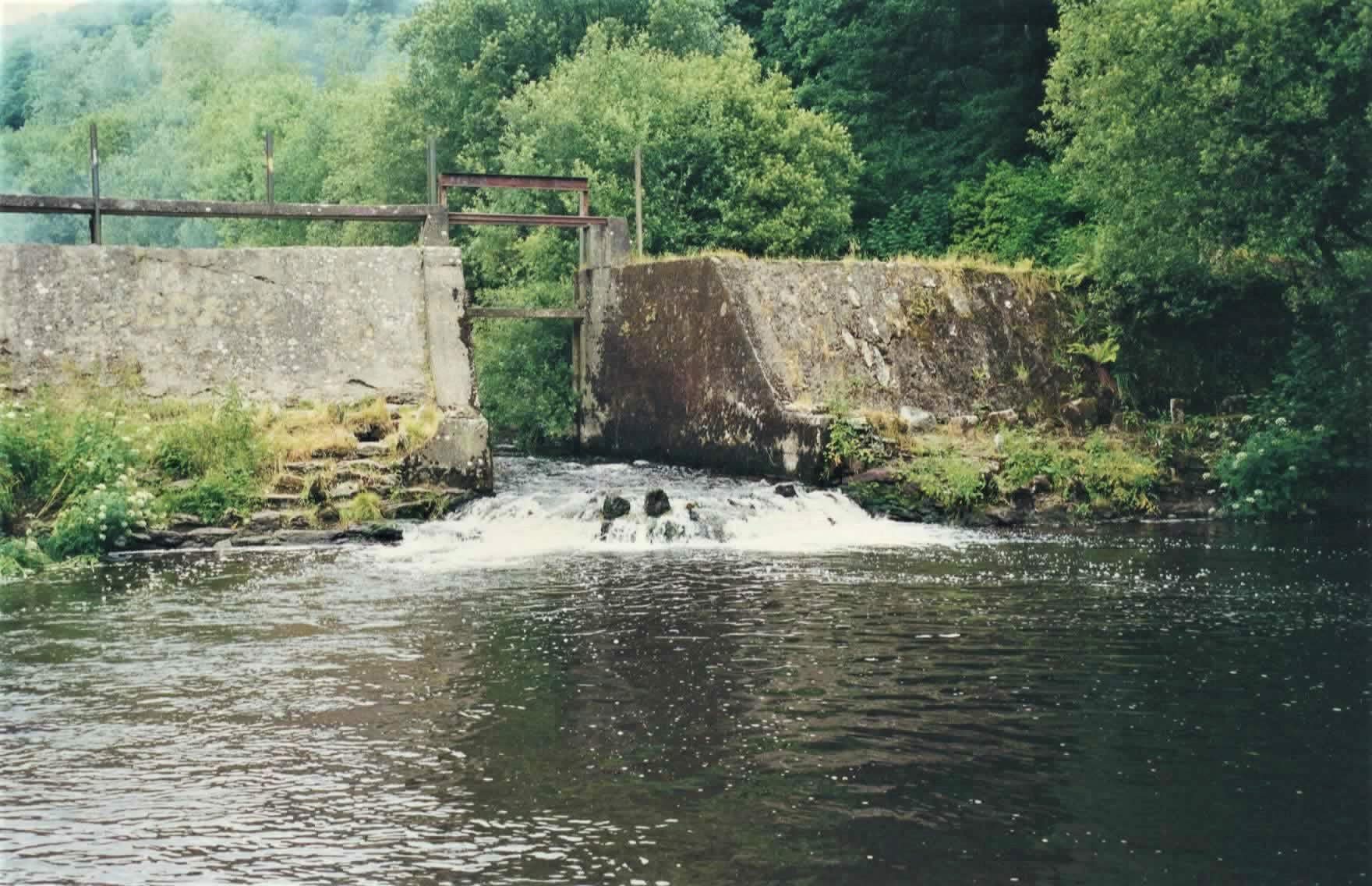 Two single storey houses with ‘Portlaw Roofs’ and ‘Belfast Trusses were constructed at the Big Pond. They are both in ruins now but were once occupied by the Mill-race and Weir operatives who controlled the water flow through a series of ‘hatches’ on its way to the mill. To prevent a clogging-up of the free-flowing water, operatives also looked after the removal of aquatic weeds, algae, pond moss and other debris from the Mill-race by means of long-handled scythes and a small flat-bottomed skiff.

The water was released from the dam/weir through outlet pipes located in the lower left-hand side of its wall and flowed into the Mill-race, also known as the Head-race, which was basically a canal or channel carrying a controlled but rapid and powerful flow of water to drive the Mill water-wheel. The water level in the mill-race was regularly controlled by a series of strategically placed sluice gates or hatches placed at intervals along the mill-race which were raised or lowered, as needed, to increase or reduce the flow of water to the mill especially important during times of flooding or water shortage.

The mill-race ran parallel to but separated from the River Martin. It also ran alongside the Waterloo Road until it crossed underneath the road at The Gulley and then flowed along behind Millstream Row before dropping 24 feet onto the mill-wheel at the end of the millrace. This water-wheel or mill wheel, rotated by the force of the water, then drove the mill machinery through a main drive shaft aided by a system of cogwheels, belts and pulleys. After turning the water-wheel, the on-ward flowing water and the channel in which it flowed were both now known as the Tail-race. This water was channelled through the grounds of the Mill to re-enter the River Martin once again. The energy provided by the water was free, non-polluting and waste free. The water returned to the Martin, further oxygenating the river which, in turn, helped aquatic life. Colman O’Mahony states in ‘Blarney Woollen Mills and the Mahony Family’ (Issue No.1 ‘Old Blarney’ Journal.) that “Mahony’s were the first firm to introduce the spinning of worsted by steam in the South of Ireland, an expert named Frederick Manley was brought from Yorkshire to supervise this development. Manley died in a drowning accident in 1836.

Richard Forrest in his article, ‘Modest Martin-The Story of a River’ (Old Blarney’ Journal No.11), informs us that ‘Heavy rain over three days in 1931 saw the dam burst causing considerable flooding but no stoppage of work at the mill. That served as a prelude to December 1948 when Blarney experienced its most serious recorded floods. The dam burst also on that occasion, this time at about seven in the evening, causing a wall of water to sweep over the inch, clear the ten-foot bank and gush through the ground floor of the houses on Shamrock Terrace.’ The Woollen Mills, the residents of the village and several businesses also suffered great personal and property damage, with a number of bridges also being destroyed during these floods of 1948.

When the water-wheel was no longer needed to power the machines, the entire mill-race system became defunct. For many years, it was a haven for all types of aquatic wild-life, water fowl, water-hens, ducks and even nesting swans. It was unpolluted, and fish could be clearly seen in its crystal-clear water but it was no longer being filled from the Big Pond. Several small streams flowed into it at the Small Pond but they alone were not sufficient to keep it aerated and viable. The main hatch in the dam wall was removed allowing the River Martin a free run through. The Big Pond emptied and dried out and in a short space of time became completely overgrown and unsightly. Cleaning of the mill-race ceased and eventually it became clogged with aquatic weeds and debris. The water dried up and the wildlife and waterfowl, including the magnificent swans, left. They would never again be seen gliding majestically up and down in the mill-race.

Between 2000 and 2004 the water-flow of the River Martin at the Big Pond was re-aligned with the wood-side of the dam which was demolished to aid the flow. When the area behind the dam/weir wall was being cleared and prepared for the construction of a new wildlife pond, the mill-race area close to the dam was briefly cleaned up and its workings and mill-race out-flow pipes were exposed but it too was also filled-in, covered over and a walk-way with a small car park constructed. The Blarney end of the mill-race was also filled in with earth and levelled to aid the realignment of the Waterloo Road and The Gulley with the Bypass. The Small Pond was allowed to grow over. A new scenic walk-way with fencing and informational plaques was constructed along much of the route of the original mill-race. There are also a couple of small car parks incorporated. Ongoing enhancement and improvement works are currently underway (2021) at the Big Pond and Mill-race.