Whatever Became of The Blarney Emblem?

Do many people realise that Blarney had/has its own Emblem?

Do many people remember the Blarney Emblem?

How many people actually bought and still have a framed copy of the Emblem?

Why has it ‘disappeared’ and why is it no longer available?

30th October 2018 is the 30th anniversary of its public unveiling.

An Emblem for Blarney

In 1985, having been made redundant from his employment as a structural/architectural technician the previous year, the germ of an idea regarding coats of arms was born in the mind of Blarney man, Griffith O’Driscoll. At the invitation of Coras Trachtala office in Cork some prototypes were displayed in “The Great Expectations Showcase” of the National Crafts Fair in Dublin in Dublin in January 1986 and this was the beginning of the Blarney Emblem. Griffith O’Driscoll is a man who has always had the well-being of Blarney foremost in his mind. In 1980, he founded the Blarney Brass and Reed Band – he plays trumpet and flugelhorn himself. In 1985, he started the Blarney and District Historical Society and in 1987 he founded the Blarney Study Group. After completing an initial study, the Group applied for Government and Cork Enterprise Board finance to undertake a comprehensive planning and development study to detail and highlight the area’s potential. The beginning of 1988 saw him finish the Blarney Emblem. As Coats of Arms can only be granted to area with municipal councils, Blarney could never have one, but it will have its Emblem through the efforts of Mr. O’Driscoll. On Sunday October 30 at 3.00 p.m. in Christy’s Hotel, Blarney, the Emblem will be officially launched by Mr. Denis Lyons, T.D., Minister for State at the Department of Tourism and Transport. A Blarney Emblem sign will also be unveiled at the entrance to the Village. As this is the weekend of the Guinness Cork Jazz Festival, a touring jazz band in the village at the launch will greatly add to the flavour of the festivities.

The crest represents the battlements of Blarney Castle which became the seat of the Colthursts in 1846 when Sir George Conway Colthurst married Louisa Jane Jefferyes. The crest also represents the crown of the McCarthys, once Kings of South Munster. The design incorporates the national colours of Ireland, green, white and orange. Also, the Cork County colours of red and white. The stag is from the arms of the McCarthys. Cormac McCarthy is reputed to have built the keep or tower in 1446. It is near the top of this structure that the famous stone is located, which legend says bestows eloquence on those who kiss it. The McCarthys held Blarney Castle with a few interruptions until 1690 when Cork fell to the Williamites. Donagh, the Earl of Clancarthy and last McCarthy of Blarney Castle, having supported James 11, was dispossessed and died in exile in1734. The orange quarter represents the rich agricultural hinterland. The spinning wheel represents local industry which was mainly woollen. Of the many diverse industries in Blarney’s past, the firm of Martin Mahony and Brothers, Blarney Woollen Mills, was of considerable antiquity and fame. The firm was established in1750, moved to Blarney in 1824 and closed in 1975. The complex is now an extensive hotel, craft and fashion centre. (Rev Fr.) Francis Sylvester Mahony, who used the nom-de-plume, Fr. Prout and who immortalised the City of Cork in ‘The Bells of Shandon’, was a member of this family.

The lion is from the arms of James St. John Jefferyes of Blarney Castle, who is largely credited with transforming Blarney into an industrial town in the mid eighteenth century. He was a grandson of Sir James St. John Jefferyes, Governor of Cork, who purchased the castle from Lord Chief Justice Sir Richard Pyne in 1703. The wreath depicts a wreath of wild olives. Both the wreath and torch have been associated with sport since the early Olympics. They represent the great local sporting traditions. The square or green in the centre represents the green which is the focal point of the village and around which the village was planned, by the Jefferyes. The quill in the centre symbolises the cultural centre Blarney was once renowned to be. Here was one of the famous Bardic Schools of Munster. The quill, being the symbol of the liberal art of writing and of learned employments, also represents Rev. Fr. Matt Horgan and Dr. Richard Barter. Fr. Horgan, at the time of his death in 1849, was the parish priest of Blarney. He was a noted Gaelic scholar, antiquarian and poet. He also designed and built churches, schools and round tower facsimile. In 1843, Dr. Barter founded St. Ann’s Hill Hydropathic Establishment, which became one of the most famous institutions of hydropathy in this part of the world. The rich and famous came for the treatment perfected by Dr. Barter. The establishment closed in 1952. The motto means, LOOK TO THE PAST, PRESENT AND FUTURE.

The following was reported in the Cork Examiner Monday October 31, 1988

The Jazz festival yesterday, played a part in the unveiling of a new symbol for the County Cork village of Blarney.

Junior Minister for Tourism Mr Denis Lyons joined Jazz star Henry Gold, Maxine Howard, Bill Berry and Teddy Edwards in showing for the first time the newly designed emblem, which, it is hoped will be a major tourist attraction for the village.

The emblem was designed by Corkman, Griffith O’Driscoll, and yesterday’s official launch was the start of what will possibly be a major money spinner for the product, which can now be bought in most major shops.

The idea for the “Blarney Emblem” came about because the village has no local authority of its own, and is, therefore not entitled to possess an official coat of arms or motive of its own.

With due pomp and ceremony, with the Blarney Brass & Reed Band performing the tunes, giving the jazz stars a brief respite from their busy weekend schedule, Minister Lyons unveiled the official emblem just outside the village.

Framed copies of the emblem were then presented by the Minister to the performers as a memento of both their visit to Cork and Blarney and the occasion.

The Minister praised the idea as being one which will promote Blarney and County Cork, as a tourist venue abroad and at home, and said it would familiarise people with the town and its importance.

The Musicians who were performing in Blarney on the Jazz Weekend 1988 and invited to attend the unveiling of the Emblem were:

Harry Gold was born Harry Goldberg on February 26th 1907 in Dundrum Co. Dublin to   Romanian/German parents, later moving to the East End of London. He became an accomplished bass saxophone jazz player, arranger and bandleader. He died on November 13th  2005.

Maxine Howard was a sensational blues singer who toured throughout Europe performing on major Jazz and Blues Festivals. Born in Oakland California, she became an Evangelist Pastor and located to Germany.

Bill Berry, born William Richard ‘Bill’ Berry in Michigan on September 14th 1930 became an outstanding jazz trumpet soloist who played with a wide variety of international artists. He changed to the cornet in the mid-1970s. He died on November 13th 2002. 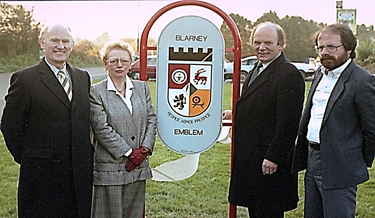 Copies of the Blarney Emblem were on sale locally for £3 each after the launch.

Epilogue: The metal frame containing the timber board with the depiction of the Emblem had been erected on the corner at the entrance to Blarney village close to where the ‘Welcome to Blarney’ stone is now located. Unfortunately it was not being taken care of, with the result that the timber eventually rotted and disintegrated, leaving only the red metal frame standing. It remained in place for a number of years until it ‘mysteriously disappeared’ overnight during the  Summer of 2013.